Analysing Shakespeare – extracts from a range of plays

The early novel – Robinson Crusoe, with opportunities to explore modern diverse voices alongside this

2.2       Addition and Subtraction of Negative Integers

3.5       Addition and Subtraction of Linear Expressions

5.3       Addition and Subtraction of Fractions

6.5       Mental Calculation and Conversion between Units

11        Volume and Surface Area of Cuboids including cubes

We follow the AQA Activate study programme, consisting of 10 ‘big ideas’ taught in both year 7 and 8.

In Year 7, we follow Activate 1. The pupils can access the textbook for this on Kerboodle. Class teachers will also often set interactive tasks and homework using the Kerboodle system, to encourage independent learning and to use technology to provide feedback to students.

In the Autumn/Winter term, all students will cover the following topics;

In the Spring term, all students will cover the following topics;

In the Summer term, all students will cover the following topics;

Every topic will finish with an end of topic test, and a lesson to reflect on the student’s progress and identify any areas that need revisiting. Our curriculum means that we are always revisiting topics to build on the foundations so will be able to pick up anything that pupils are finding tricky. 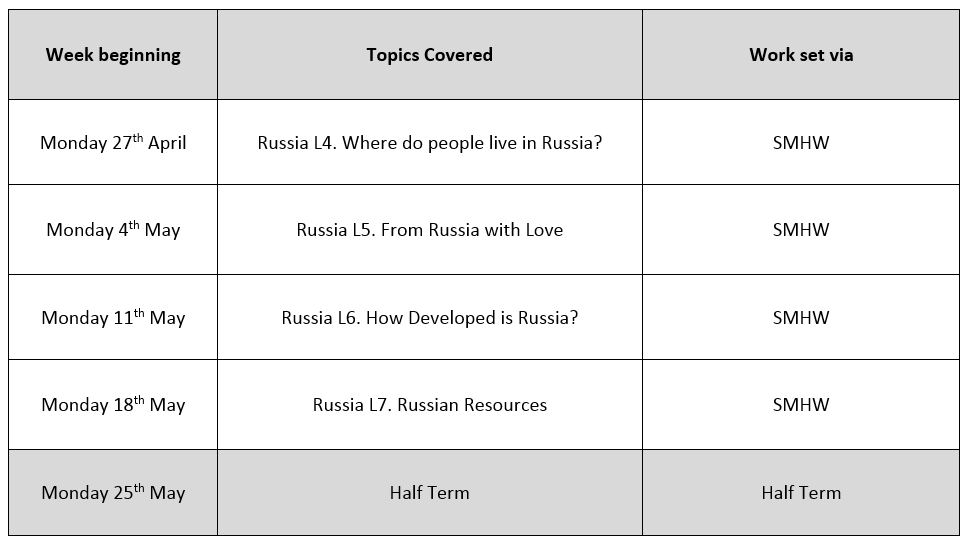 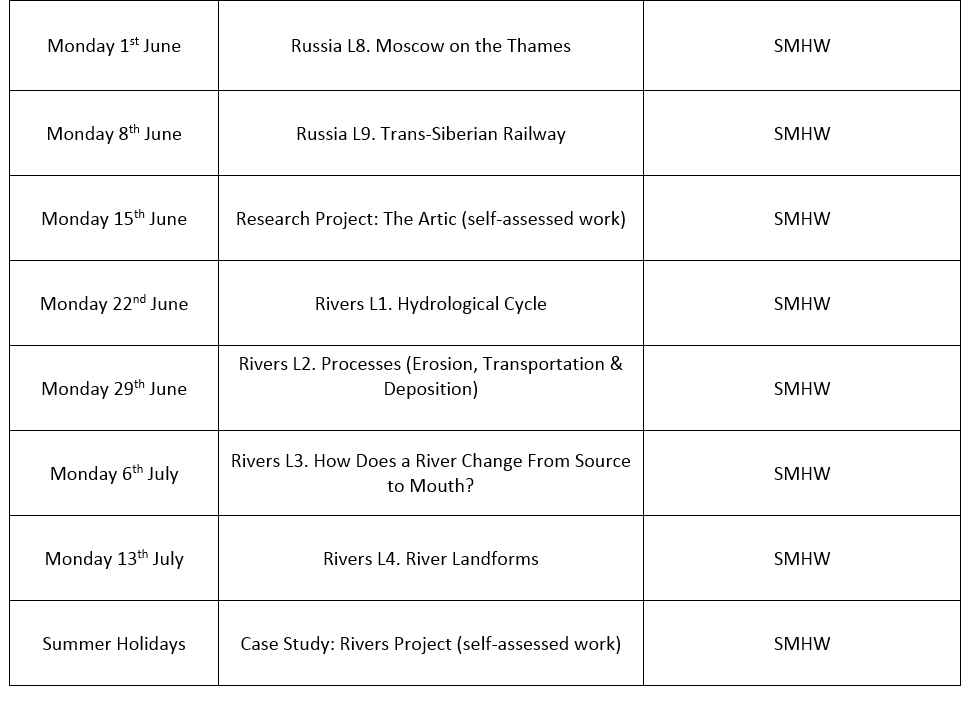 Students spend the first half of Year 7 studying Britain 1066-1509. The work is divided into a number of key themes:-

Key Theme 2: How hard was life for people in medieval town and country?

From approximately February half term, they study Britain 1509-1745:

Key Theme 2: In what ways did monarchs become less powerful?

Key Theme 3: How did Britain become a more democratic society?

·         How effectively did women campaign for electoral reform?

Wrk will be set on each of the following themes in various forms, but most likely a PowerPoint or a worksheet that will specify notes that need to be copied into exercise books and will include a variety of tasks that need to be completed and self-corrected with an answer sheet.
Regular vocab learning will also be set as well as Duolingo once a fortnight.

Work will be set on each of the following themes in various forms, but most likely a PowerPoint/Googleslide or a worksheet that will specify notes that need to be copied into exercise books and will include a variety of tasks that need to be completed and self-corrected with an answer sheet.
Regular vocab learning will also be set as well as Duolingo / Memrise once a fortnight.

Work will be set on each of the following themes in various forms, but most likely a PowerPoint or a worksheet that will specify notes that need to be copied into exercise books and will include a variety of tasks that need to be completed and self-corrected with an answer sheet.

Due to the nature of the Design & Technology course it is, unfortunately, not possible for students to complete the same content that they would have studied in school at home. We will therefore set a number of different mini design tasks that will enable the students to develop the same creative and problem-solving skills at home. We will try and make these tasks as flexible as possible as we appreciate that students may be limited by the resources available at home.

If possible, students should submit evidence of the work that they have produced online via SMHW.

Each mini design task will focus on developing the following skills:

Key stage 3
Through a variety of creative and practical activities, pupils should be develop the knowledge, understanding and skills needed to engage in an iterative process of designing and making.
Design
Use research and exploration to identify and understand user needs.
Identify and solve their own design problems and understand how to reformulate problems given to them.
Develop and communicate design ideas using annotated sketches.
Make
Select from and use a range of materials taking into account their properties. (we understand that students will not have access to materials, but they should still consider material properties when designing)
Evaluate
Test, evaluate and refine their ideas and products.

SolidWorks 3D CAD modelling – CAD modelling can help develop skills that apply to a number of different industries including product design, architecture, engineering, computer game design and animation to name just a few. If any students would like to develop their 3D modelling skills at home please email Mr Smith (smithm@piggottschool.org)  from their school email account and he will send the download instructions and licence details. Unfortunately, this is only available on PC and doesn’t work on a Mac.

Learn to do basic, textual programming in the Python programming language using easy to use tutorials. Lesson by lesson booklet and challenges provided to students shared on SMHW. Submit via SMHW. Fully guided unit.

Have fun with algorithms, learn to write pseudocode, investigate the co-relation between flowcharts and pseudocode, other concepts of Computational Thinking like decomposition, abstraction, pattern matching, encryption etc. All resources will be available on SMHW. Fully guided unit.

Under The Sea: Initial exploration into the natural form through shells. Skills to be developed, drawing, line, tone, printmaking, 3D skills.

Colour and Pattern: An exploration of colour and pattern. Skills to be developed are colour theory, pattern, design, craft and collage.

My Surroundings: Exploration of architectural details. Skills to be developed are drawing, line, tone, printmaking and 3D skills. 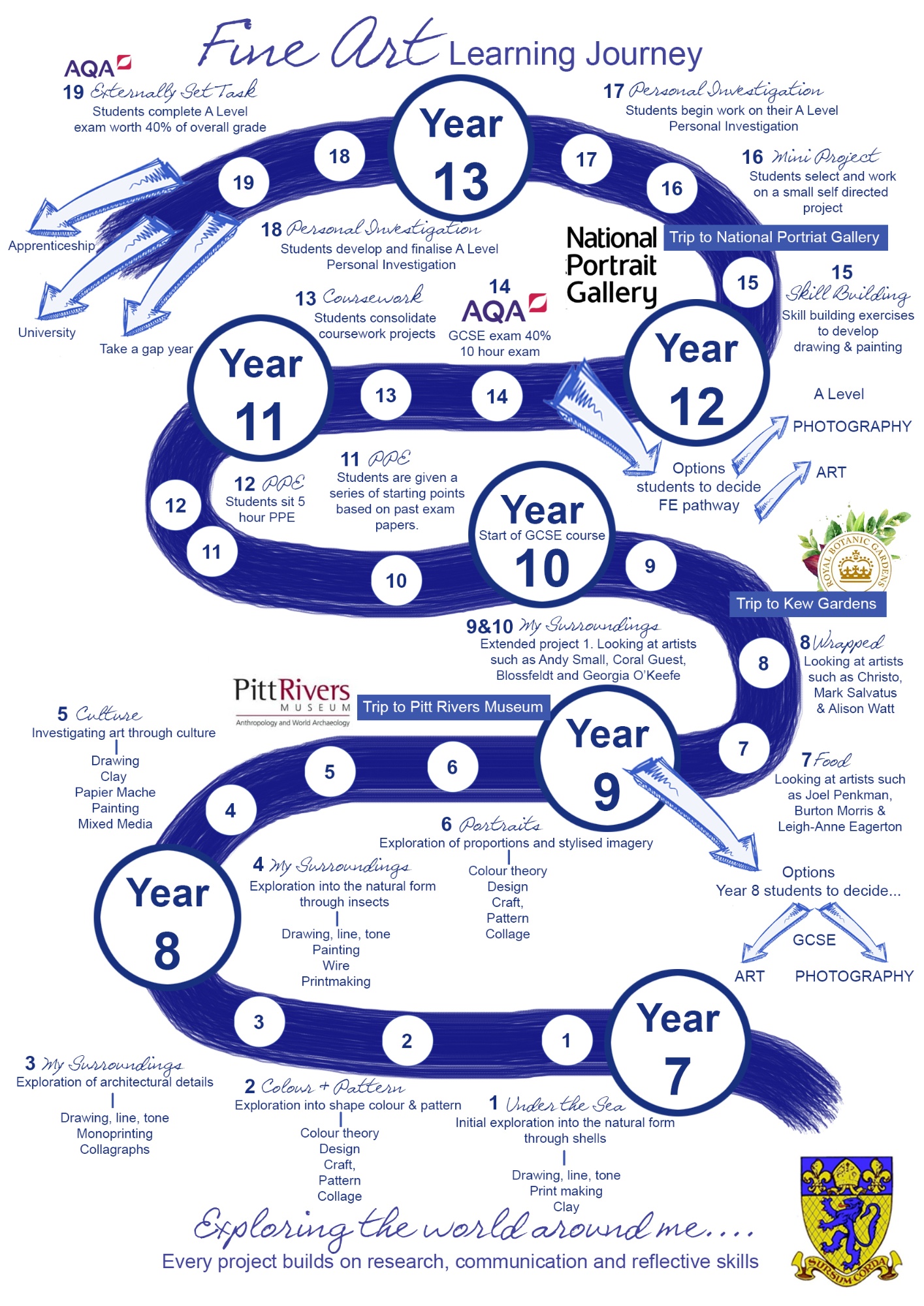 Students will be introduced to the study of Drama through a range of activities: practical and theory.

They will primarily focus on the basic skills and techniques required to perform.

In addition, they will be studying three areas of Theatre History.

At the end of the half-term there will be a consolidation quiz (set on SMHW) testing their acquired knowledge about all that they have learnt.

Students will analyse and evaluate the National Theatre’s production of ‘Treasure Island’ and use it as a stimulus to create their own work.

At the end if the half-term, students will write a theatre review of the production to consolidate their learning.

During this time it is important that students keep themselves active. In order to support students with this we will set a weekly physical challenge which will cover the different components of fitness:

Alongside this we will be setting quizzes which will cover the following areas:

Your lessons are once a fortnight so work has been set to cover 2 lessons- you decide when to complete the theory based task and when you can complete the practical task.
You may need to adapt recipes/ quantities/ ingredients- but have a go- please send photos of your practical tasks- as they are great to see!

A plan of your home learning is as follows: depending when your lesson should take place, your teacher will set the work on SMHW. 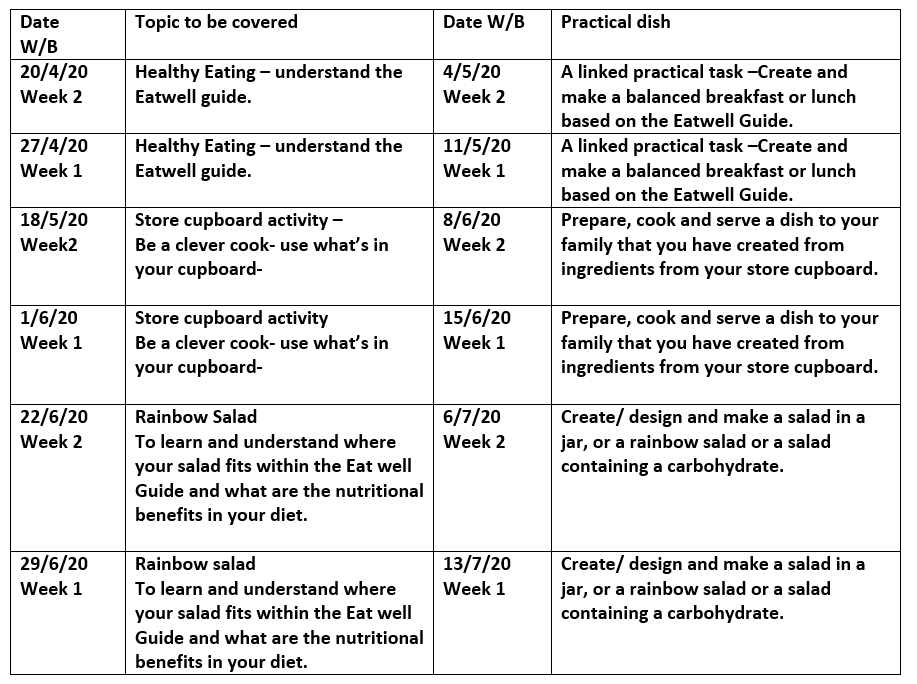